A Stage Review of ‘Annie Get Your Gun’ 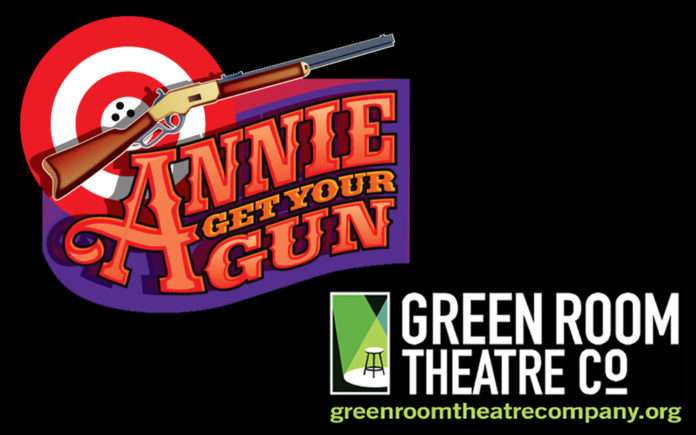 Throughout her 48-year career, Dorothy Fields wrote more than 400 songs, worked on 15 stage musicals and 26 movies.  Her successful career spanned from the 1930’s through the 1970’s, but its difficult to imagine many of her achievements being more iconic than “Annie Get Your Gun,” with book by Dorothy Fields and her brother Herbert Fields, and music & lyrics by Irving Berlin. 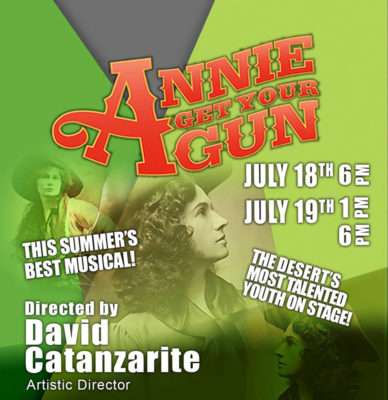 In 1946 Fields had an idea to write a show about the legendary sharp shooter, Annie Oakley. She envisioned her friend Ethel Merman in the lead role and approached Producers Richard Rodgers and Oscar Hammerstein. They liked the idea and brought Berlin on board to write the music and lyrics.

The Green Room Theatre Company and their astoundingly talented ensemble have continued their winning streak with the latest production of “Annie Get Your Gun,” at the Indian Wells Theatre in Palm Desert.

The Green Room Theatre Company and their astoundingly talented ensemble have continued their winning streak with the latest production of “Annie Get Your Gun,” at the Indian Wells Theatre in Palm Desert.

In the 1880’s sharpshooter Annie Oakley, performed beautifully by Kaitlyn Stewart, was recruited as a part of Buffalo Bill’s (Erasmo Blue Luna) Wild West show. “Annie Get Your Gun,” tells the story of how the famous sharpshooter fell for the show’s star attraction, Frank Butler, portrayed by Charles Schnell whose rich singing voice was certainly a highlight of the show. Butler slowly becomes smitten with Annie as well, but when she outshines him with her skills, he takes off and joins a competing show. Annie’s success in Europe wins her many accolades and medals, but does not translate into cash and the show is forced to approach its competition about a merger in order to save them all.

This cast was spilling over with young talent, starting with the opening Tumbleweed Program and lasting through the final bows. One of the subplots that especially captured my attention was between Winnie Tate, (Kaiya Treash) and Tommy Keller (Bennett Creighton) and their struggle to maintain a frowned upon ‘inter-racial’ relationship. Treash’s voice is stellar and inspired sincere empathy for these star-crossed lovers. Though too numerous to name all the cast individually, Director David Catanzarite excelled at staging and weaving the magic of this ensemble into a solid and professional performance.

The Broadway and London productions were huge hits and inspired a film and several revivals, including a Tony Award for best Revival in 1999 after Peter Stone revised the libretto in an effort to update the show and eliminate some of the racism. It isn’t easy to view history through a contemporary lens and I don’t believe that we should rewrite our past to accommodate a modern pallet, but in the age of the ‘me too’ movement, it is a bit of a stretch to blindly accept the blatant sexism, where Annie needs to downplay her own skills in order to make Frank feel good about himself, or to ignore the cringe worthy racism that remains a running theme in the show. Yet despite the outdated plotlines, there is no denying that the beauty of the classic tunes, “There’s No Business Like Show Business,” and “Anything You Can Do,” have survived the test of time. And it truly captures the excitement of theatre when a classic script, a skilled Director and a talented cast sing and dance their way into the hearts of an audience the way this group does.

Dee Jae Cox is a playwright, director and producer. She is the Cofounder and Artistic Director of The Los Angeles Women’s Theatre Project.