The Greenroom Theatre Company; empowering youth in the desert 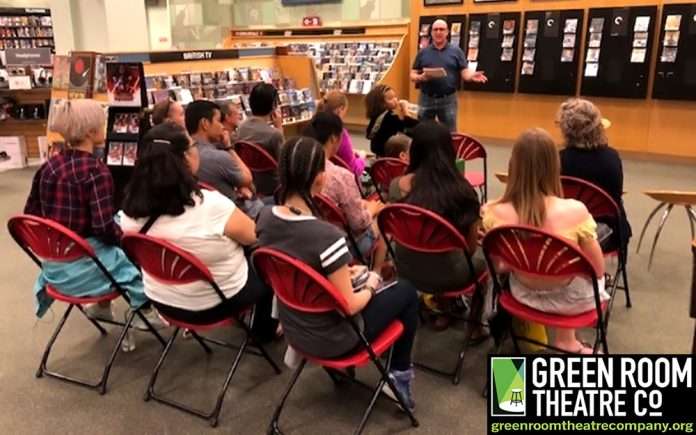 There is something about a creative partnership that inspires magic when it’s the right duo. Paul McCartney and John Lennon, were highly competitive song writing partners who frequently challenged one another to reach new creative heights. Richard Rodgers and Oscar Hammerstein, used their magic to give us timeless classic musical theatre that has been and will continue to be enjoyed by generations.  Orville and Wilber Wright, two genius brothers who combined their ingenuity and gave us wings.  Ben Cohen and Jerry Greenfield made life taste a little sweeter.

And Tina Fey and Amy Poehler are not only the creative minds behind some very exciting comedy, their chemistry together amplifies their individual success.

The combined energy of some duos can take their accomplishments to astonishing heights. Such is the case for Greenroom Theatre Company Co-founders, Board President Karen Lin and Artistic Director David Catanzarite. The husband and wife team were originally asked by the College of the Desert, to initiate a summer youth theatre program.  They wrote a proposal for a middle school program, but due to economics, COD abandoned the idea.  Karen and David, were excited about the new youth theatre program they had designed and decided to move forward on their own.  Their initial name was Palm Desert Theatre Academy, but eventually settled on the Greenroom Theatre Company.

Their goals were to make top quality, rigorous training available to children and youth regardless of ability to pay and devote the budget to the classroom by keeping student-teacher ratios small, since students often don’t get that in the public schools.  The Greenroom, would pay for quality instruction first and worry about fancy costumes and sets secondarily.

They originally envisioned the program for middle schoolers because so many of the middle school theatre programs in the desert were being dismantled due to budget cuts. As soon as the program launched, they were approached by many parents asking if their elementary kids and high school kids could participate.  So they decided to open the academy to ages 8-18 and divide instruction into two groups, kids 8-11 and teens 12-18.

When starting out they provided financial aid any way they could, often bartering with  parents who couldn’t afford to pay tuition but could provide support services and because of their great relationship with CSUSB Palm Desert Campus  they were able to work out a mutually agreeable rental deal for several classrooms on campus.

Initially they presented melodramas, Shakespeare, and scene studies with lots of singing.  The program kept growing by leaps and bounds and in order to cover all the scholarships they applied for their 501c3 nonprofit in order to be able be eligible for donations and grants.  Karen, worked on getting the approval for their State and Federal nonprofit status and recruiting the Board of Directors, while David developed and executed the programming.

For the first few years they presented melodramas, Shakespeare, and scene studies with lots of singing and by their 4th year they had grown to offer fall, winter, and summer programs.  While using the rehearsal spaces at the Palm Desert Campus they mounted their first summer musical,  You’re a Good Man, Charlie Brown, at the Palm Springs Air Museum.

Cal State University San Bernardino (CSUSB) Palm Desert Campus offered them summer rental of the Indian Wells Theatre, which enabled the staging of large musicals and their first show in the new space was Fiddler on the Roof. In order to ensure that every kid participated in the production, they staged 30-minute curtain warmers with the younger actors performing scenes and songs from a combination of Broadway shows and original creative drama pieces which preceded the main production.

They began working toward becoming an Equity Small Professional Theatre with staged readings of one-hour adaptations of great plays, including Shakespeare, in order to attract the best actors and directors in the area.  Part of David and Karen’s artistic vision was to take these small free shows to where people were, such as Barnes & Noble, public libraries, the La Quinta Brewpub, art galleries, and more.  In addition they produced a touring production of Gift of the Magi with an all-Black cast and sold out shows at six historically Black churches across the valley.

Greenroom, then launched the Coachella Valley Shakespeare Festival which proved to be very successful and they now plan a fully professional production of a Shakespeare play by 2021.  Greenroom’s seasons now start with large summer musicals, followed by staged readings and various small creative projects in fall, winter, and spring. They continue to provide programing virtually.

David, plans to soon retire from his full-time teaching profession and exclusively devote his time and energy to shaping the company into the Coachella Valley’s next fully professional producing theatre.

The Greenroom, has continued to find creative ways to fulfill their mission of empowering young people in the performing arts.  In this critical time of social isolation and with so many children not able to return to classrooms, it is programs such as the Greenroom Theatre, that have become even more vital to the well-being of our nation’s youth.

For more information on the Greenroom Theatre Company and their ongoing programs, check out their website.  www.greenroomtheatrecompany.org/

Dee Jae Cox is a playwright, director and producer.  She is the Cofounder and Artistic Director of The Los Angeles Women’s Theatre Project.